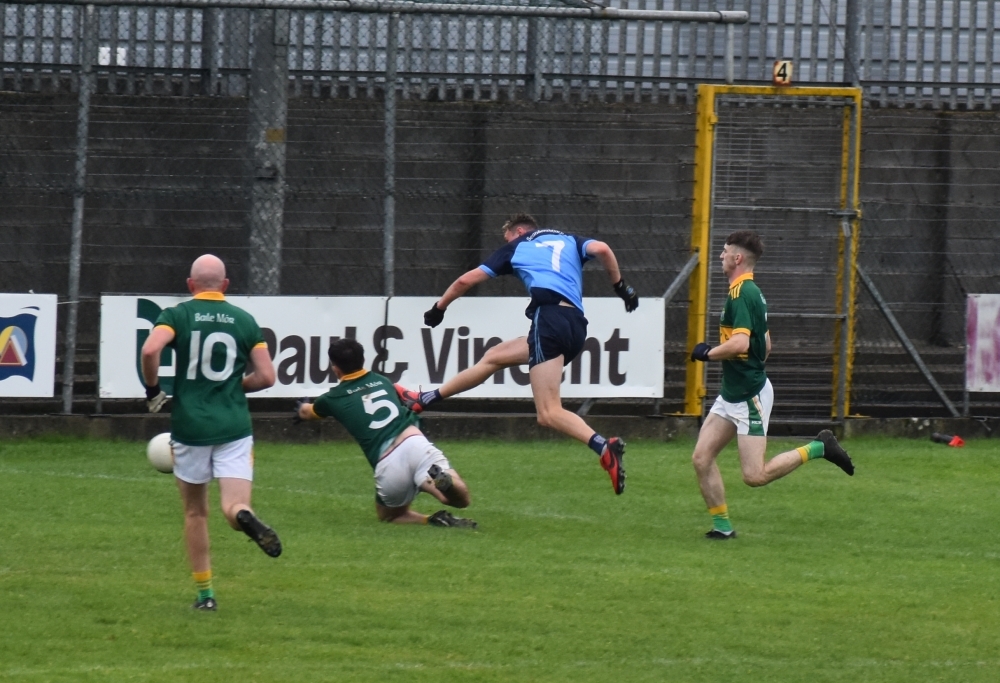 See some of the captured action at https://photos.app.goo.gl/StbbXD7BbtmK2sc17

A damp and drizzly Sunday afternoon was the setting for this quarter final of the Writech Intermediate Football Championship between Shandonagh and Ballymore. Shandonagh have been improving with every game so far and if they kept on this pathway they would be well able for Ballymore.

Ballymore were first on the scoreboard after winning the throw in and running down field to put the ball over the Shan crossbar. Shandonagh then got their first point in the second minute from a free put over the bar by Tom Molloy - a great run up the field by Brendan Killian was met by the outcoming Brian Kavanagh but Kavanagh was fouled and awarded the free. Shandonaghs second point came from another free converted by Brian Kavanagh after Cormac Coyne had his jersey tugged by the fullback when he made his inside run. Cormac Gordon then got Shandonaghs third point after being involved earlier out in midfield moving the ball forward, he continued his run eventually receiving it back on the left side of the D and he majestically slotted it over with his left foot. Ryan Norris then went on one of his characteristic runs when he came out to gather a ball on the left and took off inwards towards the goal leaving his marker with little option but to fowl him as he sped towards goal. The free was again converted by the brilliant foot of Brian Kavanagh. The conditions were slippery and tough for both teams at this stage but neither was using it as an excuse and were playing at full revs. Norris was again involved in a score for Shandonagh when he made himself available to Brian Kavanagh who was taking a free out on the 45 meter line. Norris returned the short free to Kavanagh who slotted it over from 30 meters out. With 16 minutes gone Shandonagh were ahead by 2 points on a score of 5 points to 3. The Shandonagh keeper Conor Craig was then tested when a patient build up by Ballymore eventually found a crack in the Shandonagh defence but the shot from the Ballymore forward was fantastically pushed out over the sideline by Craig for a 45. Shandonagh found the net shortly afterwards when a blisteringly powerful run by Brendan Killian saw him explode through a small gap between two Ballymore defenders and he expertly drilled it low into the bottom left corner of the goalmouth to the rapturous roar from the Shandonagh supporters – a great example to all youth in attendance of how to kick for goal. Shandonagh then lost Cormac Gordon through injury when he had the misfortune to accidentally clash with the teak Conor McCrossan when both went for the same ball. Jensen Nagle then got in on the attacking action as he blazed up the left sideline and received a quick free from Brian Kavanagh. Nagle tore up the turf towards goal and when he turned back Kavanagh was again on hand to receive the pass and coolly put it over the bar.

Shandonagh were first on the scoreboard in the second half after a patient build up eventually found the run of Kevin Boyle, who was on instead of the injured Cormac Gordon, and Boyle swiftly turned just outside the D and put it over the bar. The intensity was rising now as both teams attempted to impose themselves on their opposition and both sets of supporters made their voices heard. Jensen Nagle again made a strong run up the middle of the field, was fouled and awarded a free for Brian Kavanagh to convert. Daire Conway was then introduced to the action for Adam Cronin. With just under 12 minutes gone of the second half Ballymore levelled the score getting their 12th point to Shandonaghs 1 goal and 9 points. Tom Molloy, who was having a quiet game by his own standards, was then unlucky not to put Shandonagh ahead again when his run at the Ballymore defence saw him chopped down at the ankles but this was missed by the officials. Shandonagh made another change when Ryan Donnelly was introduced to replace Conor McCrossan. Ballymore then took the lead after some great defence by Shandonagh saw them win back possession but they were judged to have taken too many steps out of defence and the resultant free kick was pointed. Young Ryan Donnelly then got himself on the score sheet after a great long ball in from Brendan Killian found Cormac Coyne who passed it out to Donnelly to smoothly strike it between the uprights and level the game again. Mickey Boyle was then introduced replacing Cormac Coyne who had a good day at full forward. Coyne is getting back to his old self exemplified by a great run in the first half through the heart of the Ballymore defence but his shot just went right of the uprights at the time. Shandonagh then regained the lead when the score of the game was delivered by Ryan Norris who darted out from the corner to receive a pass from Kevin Boyle and quick as a flash Norris turned on the spot driving the ball over the bar. Ballymore pushed on and again managed to get a point to level the game with 7 minutes of normal time left. Shandonagh supporters were then left on edge when Daire Conway received marching orders from his second yellow card with 3 minutes to go of normal time for a silly pull down of his man out in the middle of the field. At this stage hearts were in mouths for both sets of supporters as this game could go either way and Ballymore had the extra man. But Kevin Boyle again showed his class as he timed his run out to gather a low ball in and 30 meters out he turned and curled a high ball inside the upright to put Shandonagh ahead by a point in the second minute of injury time. With injury time up the final whistle was not sounded as abruptly as it was at the end of the first half leaving Ballymore with one more chance to come up the field. Mickey Boyle was like his young self racing back defending when he received a black card for bringing down a Ballymore midfielder in an awkward tackle. With time well up, a fortuitous free was awarded to Ballymore 25 meters out from the Shandonagh goals. To the astonishment of all the kick hit the left upright and came back into play and after a nervous few seconds the final whistle sounded much to the relief of all Shandonagh supporters and players.

The depth and talent of the Shandonagh bench was a major factor in this victory. Innovative and disciplined play by all starting players laid the foundation for this performance. Kevin Boyle and brother Mickey are improving with the game time they are getting on their road to recovery from injuries. The Shandonagh full forward line were well on top today and full of running; both Ryan Norris and Cormac Coyne are a handful for any defenders when they decide to go at them. Brian Kavanagh is giving a masterclass in kicking with every match he is playing. The half forwards and midfielders were relentless in their running and support play. Aaron Craig is proving a great link man between the forwards and backs. Gareth Carr and Brendan Killian both brought a hardness that is noticeable when either is absent. And a full back line with both Daniel Scahill and Jensen Nagle in the corners and the tenacious Ben Treanor in the middle will not be easily penetrated. This was a good win for Shandonagh, they showed great composure and calmness to keep their formations and worked hard for each other when showing for the ball and defending. If they hold onto this mindset and work ethos, anything is possible.

See some photos from the day at https://photos.app.goo.gl...

Some images of the action can be seen at https://photos.a...