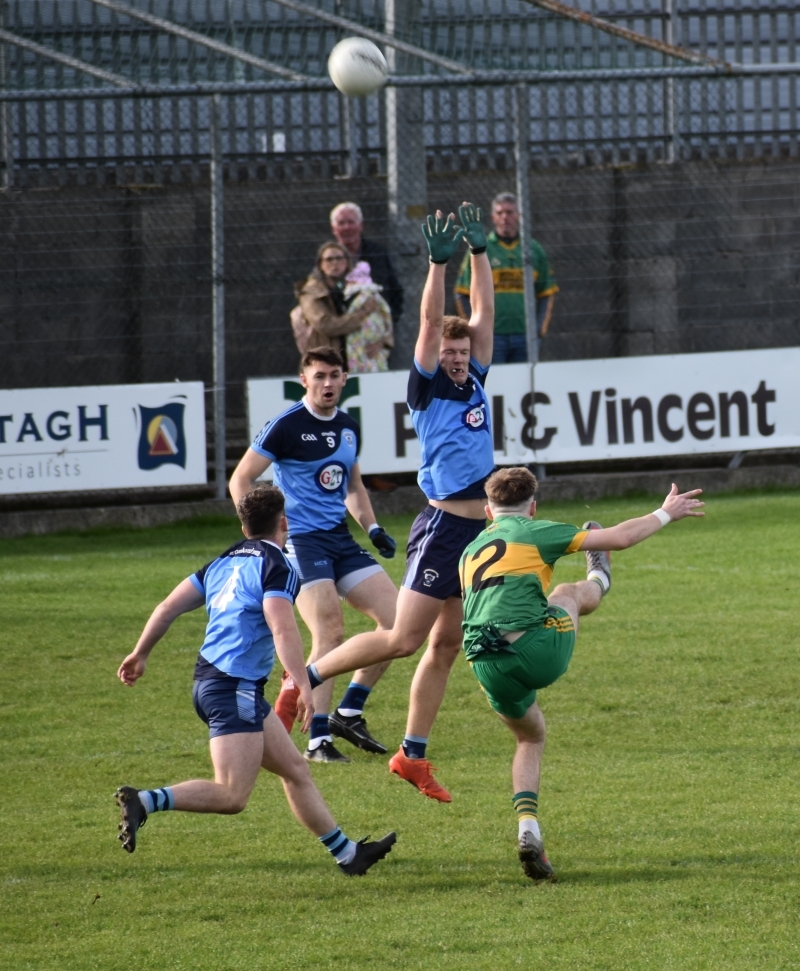 Some images of the action can be seen at https://photos.app.goo.gl/r57XUAYt1PGWBtRe7

Last weekend Shandonagh took on Tubberclair in the Writech Intermediate Football Championship Final of 2022. A bright and dry day for football with Shandonagh playing into the Harbour Place shopping centre end for the first half.

Tubberclair started the brighter of the two teams but Shandonagh were quickly weighing up their opponents and putting pressure on the kickers resulting in Tubberclair kicking 2 wides. Shandonagh were first on the scoreboard when sharp shooter Brian Kavanagh converted a 50. Kevin Boyle was unlucky not to find the net after a bad mistake by the Tubberclair keeper gave the ball to Boyle and with an open goal his shot fro outside the D was just off target. Shandonaghs second point came from a great run out from Ryan Norris who received an inch perfect pass from Gareth Carr, Norris called the mark and then stroked it over the bar. It took until the 8th minute for Tubberclair to get their first point on the scoreboard. Shandonagh were motoring very well at this stage, working hard for each other and eager to make themselves available for the ball at all times. Twelve minutes into the first half and Tubberclair got another score from a free kick levelling the score at 2 points a piece. Gareth Carr then displayed his shooting skills when he went forward and made himself available for a pass out on the 50 meter line and curled it over the bar for a super score. Tom Molloy was on form and having a good game when he kicked Shandonaghs fourth point from left side of the D after another bad kick out by the Tubberclair keeper. Brendan Killian was next on the list of scorers after he gave a long ball into Tom Molloy who called for the mark and Killian sped on to receive the quick return pass from Molloy and Brendan curled it beautifully over the bar with the inside of his boot. Tubberclair added their third point from another free after Daire Conway was judged to have fouled his man. Shandonaghs sixth point was a magnificent score when a great cross field ball by Tom Molloy off the outside of his left foot landed pinpoint into the hands of Gareth Carr who punted it straight between the uprights. Kevin Boyle was unlucky up on the full forward line when he was inches short of completing a one-two with Tom Molloy to get in and threaten the Tubberclair goal again.

With just over twenty one minutes gone of the first half Shandonagh were ahead by 3 points. Shandonagh were playing the smarter football holding onto possession well while still progressing forward and connecting with the inside forward line. Tubberclair on the other hand were being much less efficient than Shandonagh in their attacks and racking up the wides in the process.

Aaron Craig then displayed his athleticism when he drove at the Tubberclair defence and gave a great cross field ball to Brian Kavanagh who slotted it between thee posts for Shandonaghs seventh point. Another Shan attack resulted in Tom Molloy gaining possession and then kicking an inch perfect ball to the outcoming Ryan Norris who called the mark. Norris’s kick from just to the left of the D had us all fooled as he appeared to connect poorly with the ball but still managed to get ferocious forward spin on it which deceived the Tubberclair keeper to roll off the top of his gloves and into the top of the net.

24 minutes gone and Shandonagh were well on top and leading with the score 1 goal and 7 points to 3 points. The tireless Conor McCrossan then got Shandonaghs eighth point after the dominant Shandonagh midfield and half-forward line shut down all options for the Tubberclair kick out enabling McCrossan to win the kick out and dispense it back over the bar from the left hand side. The panic in Tubberclair was palpable at this stage and half time probably couldn’t come fast enough for them.

The Shandonagh full back line then provided their supporters with a few seconds of magic when they went on a rare foray up the field together. Anticipation rose as they bore down towards goal but on the 13 meter line the ever steady Brian Kavanagh came out to take the pass and kick it over the bar with his left foot.

Shandonagh were quick to deal with any threats with the wise head of Alan Hickey pulling a Tubberclair jersey back to break down a threatening attack and Hickey getting himself a timely yellow card. Tubberclair added the next 2 points but were still adding to their overall wide tally throughout. Towards the end of the first half Tom Molloy again displayed his class when he latched onto the end of a well worked attack into the Tubberclair box and under huge pressure managed to get off an up and over curling kick towards goal with his right boot but the Tubberclair keeper just managed to get fingers to the ball and push it out over the end line.

Shandonagh knew that their was more to come from Tubberclair and the second half was going to be a different game entirely. Tubberclair were first on the scoreboard after 40 seconds but followed that soon after with another wide. Tubberclair put pressure on the Shandonagh kick out resulting in Shandonagh finding it hard to progress past their midfield for a period. Shandonagh didn’t get in their first attack until over 12 minutes had gone but the shot went right and wide. Half way through the second half and the talent on the Shandonagh replacements bench started to come into the action. Adam Cronin was replaced by Adam Treanor and Brendan Killian was replaced by Cormac Coyne with only the goal separating the teams now.

Shandonagh were trying hard to re-establish themselves in the game but little things were going against them. Kevin Boyle showed for an inside pass but just slipped at the moment he kicked the ball with his effort dropping into the Tubberclair keeper to clear. Twenty minutes gone of the second half and Tubberclair reduced the difference to a single point. Ryan Donnelly was then introduced to replace Kevin Boyle.

Shandonaghs first score of the second half came after 21 minutes when Aaron Craig did the hard work moving the ball up through the centre and finding Brian Kavanagh who kicked it over with his left boot. That was to be Kavanaghs last contribution for the day as he was injured shortly afterwards and replaced by the experienced and calm Mickey Boyle. Maitiu Scully also came on replacing Conor McCrossan. Tubberclair then added the next 2 points to level the scoreboard in the last minute of normal time. However Shandonagh were still putting their bodies on the line at this stage with Daire Conway diving flat out and blocking a Tubberclair kick. With the clock into injury time up stepped the crafty Mickey Boyle to put Shandonagh ahead again with a great point. The final Tubberclair attack resulted in a miss timed shoulder by Shandonagh and the resulting free from the 45 meter line was converted to level the score.

This was most definitely a game of two halves. Shandonagh owned the first half with some great team play and hard work. It was a solid performance and nothing short of what they are capable of on any day they step onto the pitch. They played to their strengths with simple fast balls into on-running men and supported each other at all times. Their composure and level-headedness meant they wasted the minimum attacks.

The second half was just one of those episodes where they let their concentration drop for a short period and then couldn’t find their rhythm. They forgot the physicality that they brought in the first half and let Tubberclair into the game too easily. Despite this they never gave up and kept plugging away until the end. Testament to their resilience was when Tubberclair levelled the score in the last minute of normal time and had all the momentum but Shandonagh still went back up the field and Mickey Boyle got the score to go in front.

The full forward line with Kavanagh, Boyle and Norris have all the attributes required to deliver no matter how good the defence with Norris getting better with every game. The bench with forwards the likes of Mickey Boyle, Cormac Coyne and young Ryan Donnelly are ready to step in and deliver at any stage without any drop in quality. Tom Molloy is a top quality play maker with a huge work rate, some of his passes are a lesson in how to kick and connect with a ball perfectly. The dynamic Conor McCrossan and experience of Alan Hickey are great link men at half forward position. Midfield needs it’s work horses and athletes and what better men that Aaron Craig and Adam Cronin. Craig is playing powerful football as the championship campaign has progressed and coupled with his discipline and toughness is a huge asset to have in the middle. The half back line any day of Carr, Killian and Scahill will ensure attacks are pacey with quick ball into the moving forwards all day. Conor Craig has been faultless in goal and now has Daire Conway back in front of him. Conway brings 110% commitment and always puts his body on the line urging on his team mates no matter the battle in front of him. And with corner backs of the quality of Jensen Nagle and Ben Treanor the opposition corner forwards will have to be at the top of their game to get any change from play.

This wasn’t an opportunity lost but a lesson in how to come out after half time. Tubberclair were always going to come back at Shandonagh but the Shandonagh men just forgot to up their gear also. When they take the field on Sunday and look around at their teammates and the quality on the bench they should know they can take Tubberclair if they play to their abilities. If they step it up a level and play to their best they will know they can take anyone in front of them.

See some photos from the day at https://photos.app.goo.gl...

See some of the captured action at https://photos.app.goo...