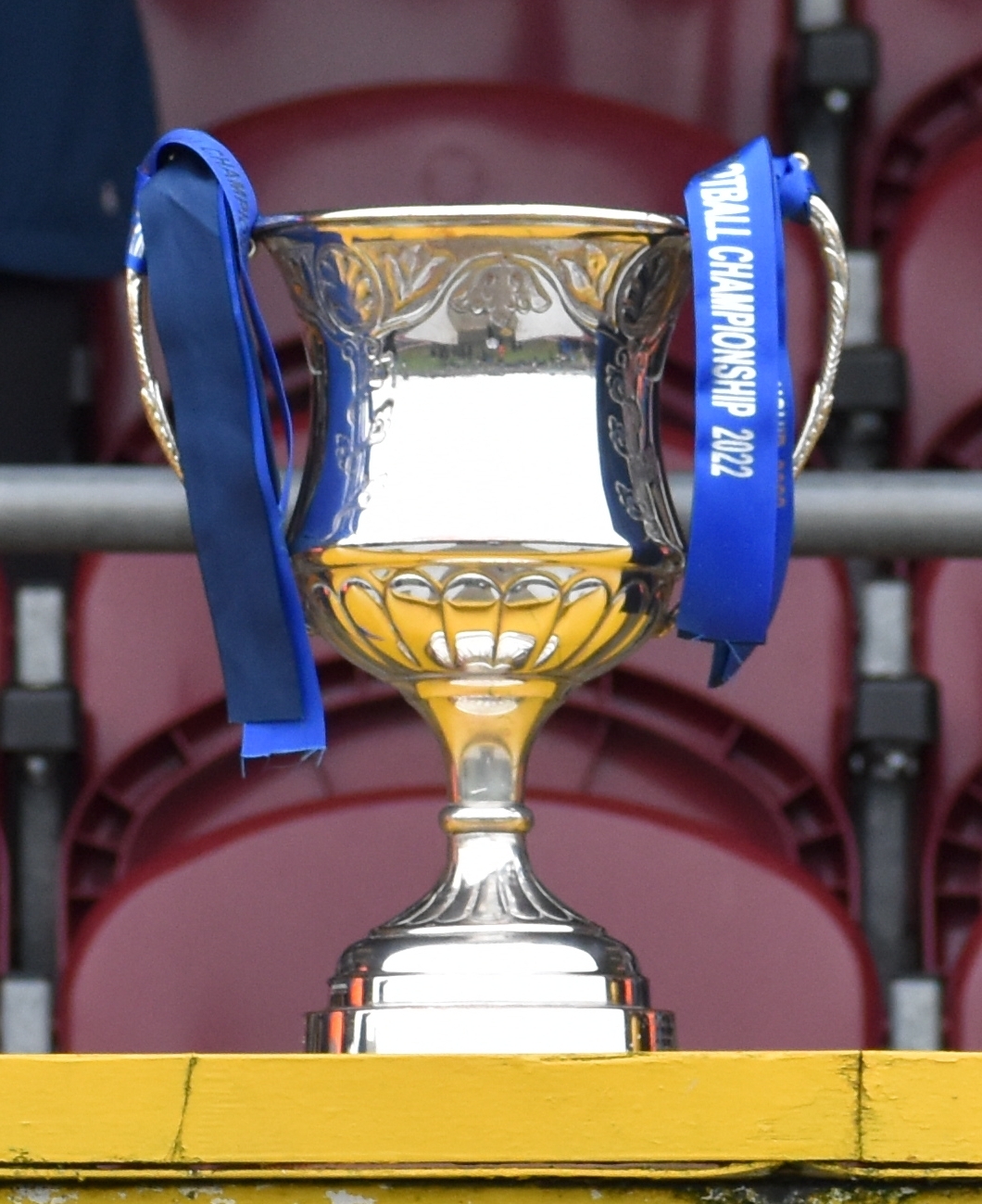 See some photos from the day at https://photos.app.goo.gl/wtxxtwo4Ep26z6N18

Last Sunday 16th October was the day the Shandonagh men's team faced Tubberclair in the replay of the Intermediate Football Final for 2022. Shandonagh made their intentions known with only a minute gone when Aaron Craig delivered a high ball into Brian Kavanagh who had run out and called for a mark, Kavanagh converted with his right boot. Both teams then settled into a great game of intense end-to-end football of a high tempo. Kavanagh was unlucky with another shot after 8 minutes when it pulled to the left and wide but 2 minutes later he again called a mark after a lovely ball in from Gareth Carr and kicked it over from just left of the D

Tubberclair were playing a sweeper and closing down inside space but Shandonagh were more than able to work the ball in close enough to take a shot. This was exemplified by the industrious Conor McCrossan making an inside run to receive a hand pass from Brendan Killian and McCrossan curled it beautifully up and over the bar from the right.

With 10 minutes gone on the clock Shandonagh were leading by 3 points to Tubberclairs 1 point. The Shandonagh backs were sticking tight to their opponents and nothing was coming in too easily as the Shandonagh midfield and half backs were pressuring the opposition players with the ball. Tubberclair got their second point from a free after the referee spotted a Tubberclair jersey being tugged.

Both teams were well up for this and not stepping back in any confrontations, players were riling each other up and the referee was doing his best to keep on top of it and allow the game to flow. Tubberclair managed to level the score after 20 minutes.

Next with normal time up a hop ball was thrown in by the referee after Shandonagh accidentally called a mark for a kick pass from inside the 45 meter lines. The resultant throw ball was connected with by a Shan fist and found it’s way to Brian Kavanagh who quickly turned and curled a shot up and over towards the goal posts. The shot came down off the upright and into the hands of Brendan Killian who was wisely following up the kick. Killians first shot from a narrow angle was blocked by the keeper but the rebounding ball was collected again and quick as a flash Killian blasted it just inside the right post and into the back of the net to the roars of young Shandondonagh supporters behind the goals.

The first order of business for the second half was a yellow card to both Shandonagh and Tubberclair players for some jostling that occurred just before the half time whistle. Also after the break Maitiu Scully had come on to replace the injured Daire Conway and Ryan Norris came on to replace Mickey Boyle.

Tubberclair were first on the scoreboard getting a point from a free. They were unlucky not to get a goal a minute later after a high ball in carried over the top of the defence but Conor Craig read the situation very well to come out to meet the Tubberclair forward and hold him up long enough for the Shandonagh defenders to get back and settle the situation.

Shandonagh got their first point of the second half after 6 minutes when a long cross field ball from Gareth Carr found Brian Kavanagh who rounded his man and then curled a high ball over the bar from the left hand side.

8 minutes gone and Brian Kavanagh again made himself available this time on the right hand side but his kick went wide. Less than a minute later Kavanagh found himself in the same position after a long ball in by Alan Hickey and he casually dropped it over the bar. It takes a special kind of skill to know how much to adjust your kicking technique and kick it over as Kavanagh had just demonstrated.

Aaron Craig then got in on the scoring action when he pushed forward to support Kevin Boyle who was closed down in the corner and Craig, with a powerful swing of his left boot, sent the ball high and well over the bar. Three minutes later Aaron Craig did it again when he got Shandonaghs seventh point driving the ball out into the Dunnes car park from outside the D.

Half way through the second half and Shandonagh were playing extremely well leading by a goal and three points. Tubberclair were not phased and kept plugging away getting a point from play at this stage. They were however feeling the pressure from Shandonagh as they were still kicking wides from scoreable positions.

The Tubberclair attacks did pay off however when they were awarded a penalty for their full-forward being pulled down in the square. Conor Craig had little chance as the penalty was blasted to the back of the net and now the difference between the teams was down to 2 points.

Before the kick out could be taken Conor McCrossan received a red card for an innocuous push on a Tubberclair man that was interpreted as a strike. Shandonagh were going to be tested now being down to 14 men and Tubberclair with the bit of momentum after the penalty goal.

But almost immediately you could see the Shandonagh men up their work rate and tear into this period of the match. Cormac Coyne was introduced for the tiring Kevin Boyle who had put in immense effort in the full forward line.

Their efforts were rewarded when Brendan Killian again powered up into the half forward line and received a lovely ball in from Gareth Carr. For a moment Shandonagh supporters thought Killian would rattle the net again but his first attempt to pick up the ball faltered and when he did pick it up he coolly took the score to get Shandonaghs 8th point.

Maitiu Scully had been solid at the back up to this stage and hadn’t gone on any of his trademark running attacks up the field. Well that was about to change and in dramatic fashion with 4 minutes left to play of normal time. Ben Treanor had a free on the right hand side about 30 meters out from his own endline when Maitiu Scully came out line a train to receive the short kick pass. Scully powered straight between and past two Tubberclair attackers and gave a hand pass to Tom Molloy in midfield while continuing his run. Tom Molloy took one solo out of the ball and then gave a fantastic low pass up into Maitiu who picked it up just inside the Tubberclair D. Taking one bounce himself Maitiu Scully then rocketed the ball past the Tubberclair full back and goal keeper to the roar of the Shandonagh support and his teammates.

With 3 minutes of normal time remaining Shandonagh were ahead by a goal and 3 points and were not showing any signs of weakness despite being a man down. The quality of the Shandonagh bench was being called on as Alan Hickey was feeling the effects of his efforts and was replaced by Ryan Donnelly and Cormac Gordon came on to replace Brian Kavanagh who had a magnificent game.

It was bodies on the line time for any Shandonagh defenders as Tubberclair continued to attack and attempt to get shots on goal. Maitiu Scully, Gareth Carr, Tom Molloy, Daniel Scahill, Cormac Gordon and Adam Treanor were just some of the men who threw themselves in front to block balls in injury time. The final Shandonagh attack nearly saw Ryan Donnelly add to the scoreboard but his shot was pushed up and away by the Tubberclair keeper.

This was no fluke or better team on the day result. These Shandonagh men just delivered what they are capable of delivering. The style of football they are playing is fantastic to watch and the running and long balls in paid huge dividends. Whether it was direct ball or cross field balls the movement of all the forwards and indeed the runs of the backs into space were too much for the Tubberclair defence. On the opposite end Tubberclair were constantly harried and put under pressure by the Shandonagh defenders. Conor Craig had another great day in goals with his kick outs being very effective. Midfield powerhouse Aaron Craig contributed 2 great points and numerous great balls into his forwards. Special mention to Ben Treanor and Jensen Nagle in as corner backs whose dynamism means they can be found anywhere on the pitch doing what needs to be done. The bench is the what sets this team apart though. With the fast paced game plan bodies will tire and when you can bring in subs such as Maitiu Scully, Ryan Norris, Cormac Coyne, Ryan Donnelly and Cormac Gordon amongst others you have an exceptional panel of players. We look forward to the Shandonagh senior men progressing in the Leinster IFC now.

Some images of the action can be seen at https://photos.a...

See some of the captured action at https://photos.app.goo...